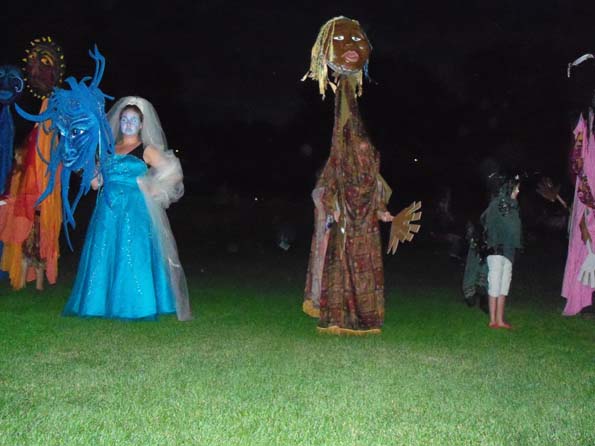 KAZZZAM!
2011 marked Myths and Mirrors’ 15 Anniversary and the first Kazzzam Festival! Intended to celebrate M&M’s 15 years of community arts in Sudbury, the festival took on a life of its own which will be carried into M&M’s 16th year and beyond. KAZZZAM was developed collaboratively by past and new Myths and Mirrors participants, from the initial idea of a festival, to the events within the festival, to the development of the events, right down to the very name “Kazzzam”! What happened through the intention to celebrate and explore the 15 years of Myths and Mirrors was a celebration of participation which is inherent in community art. The participants became the art.

Over a hundred participants gathered on Friday, August 26th to contribute to the street tour of past downtown projects. We painted and costumed ourselves, we drummed, sang, drew and danced as we celebrated. Past musical, theatrical, poetic and visual work were called to attention while new music, poems, theatre and visual art were created. It was a joining of past and present art.

To check out images from Kazzzam from the workshops to the festival click here.
Click here for our KAZZZAM video. 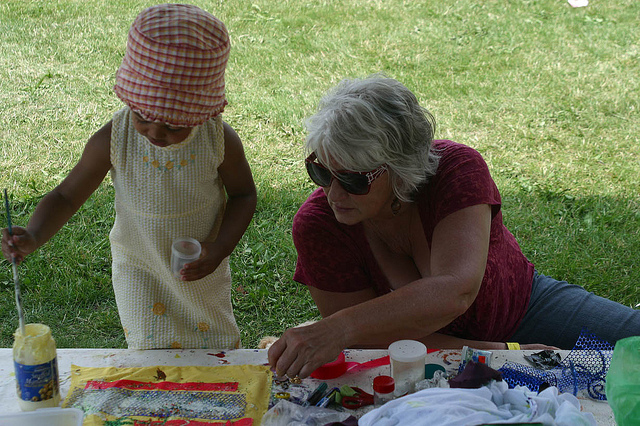 Etcetera Tapestry
During the summer of 2011 our community artists Melanie St. Pierre and Katie Fenerty and our Artistic Director Sarah King Gold worked with festival-goers at Northern Lights and River and Sky to put together a tapestry. Participants were invited to enter into a conversation which balanced between Myths and Mirrors’ theme which was just ending, Transitions, and the one just beginning, The Art of Survival/The Survival of Art.

To look at images of the making of this tapestry at Northern Light festival click here. 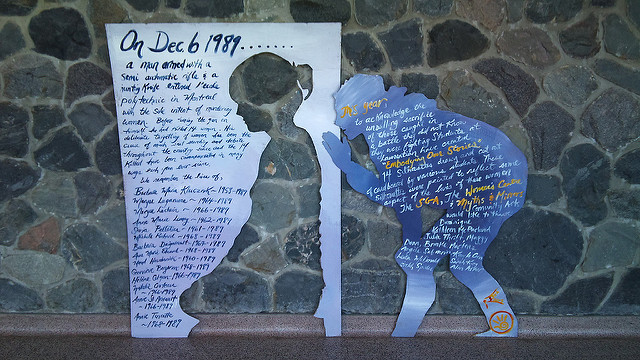 Montreal Massacre Memorial Project with Laurentian University
Prior to December 6th, 2011, 15 students from Laurentian came together to remember the 15 women who were killed at Montreal’s Ecole Polytechnique on December 6th, 1989. The students drew silhouettes of their own bodies and filled the forms with images, designs and colours which represented their feelings about the tragedy or which represented a remembering of an individual woman who was slain. Throughout the work they engaged in conversation about violence against women, how it has either changed or stayed the same. The participants also explored how they identify with the women who were students of the same age and stage of life as them.

Artists Alan Asher and Sarah King Gold worked in partnership with Laurentian’s Student General Association to pull this project together. The work was presented in the “bowling alley” at Laurentian over the course of the week of December 6th. To see the images of the silhouettes click here.