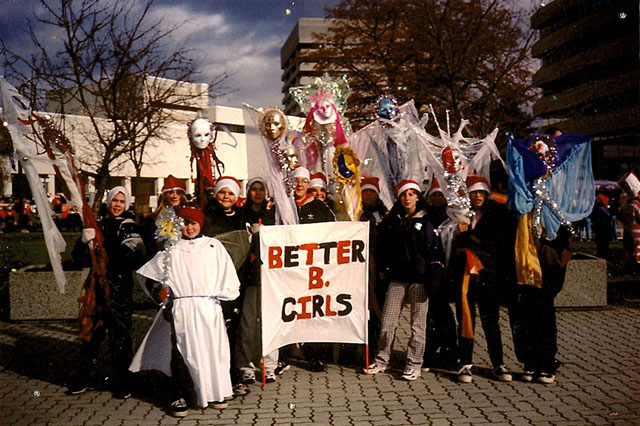 The ‘Better B Girls’ Theatre Troupe consisted of approximately 20 ‘youth at risk’ girls between the ages of 11 and 17, participating in weekly workshops and collective creation. Over the years, these girls, based out of the Donovan and Flour Mill neighbourhoods, created plays, rituals, masks, costumes, murals, award winning floats for our annual Santa Claus parade, as well as many other art works. The B Girls were a regular group of volunteers participating in creating community spirit, costuming and face painting at many city celebrations and events, designing and running an annual Haunted House on Halloween in the Flour Mill and collectively putting together stilt performances. The things we learned through the B Girls programming resulted in youth program modeling and integrated into our regular youth projects.

Who’s the fool participatory conferences were originally designed in partnership with Re-Action Collective and Youth Against Racism to examine media messages and to explore ways that we can work to create our own culture. The annual conferences were scheduled on or near April Fools Day, thus the name ‘Who’s the Fool?’

The initiative came out of a consultation process developed with teens on the theme ‘possible futures.’ The group decided they needed to create awareness about ‘culture’ – who creates it, who controls it, and ways that they can reclaim creation of a culture that represents them. The conferences featured workshops by journalists, popular educators, and participatory sessions with multi-disciplinary artists.